Statement of the Problem: Every effort for increasing the calcium concentration in the saliva would be beneficial for prevention of dental caries. Regarding this issue, the natural products could be considered safer and more cost effective. Sesame is rich in calcium but the data about the effect of sesame on enamel roughness is inadequate.
Purpose: This study aimed to assess the effect of an experimental sesame gel on the surface roughness of human enamel by using atomic force microscopy (AFM).
Materials and Method: In the current experimental study, fifteen enamel slices with 1mm thickness were prepared. They were polished and acid etched to produce a substantial rough surface prior to the first AFM analysis. The enamel blocks were randomly divided into three groups treated with distilled water, fluoride gel, and an experimental prepared sesame gel correspondingly. The treating agent was applied for 3minutes at 0, 8, 24, and 48h intervals and washed by distilled water after each cycles. Ultimately, the final AFM micrographs were prepared. The statistical analysis was performed using paired t-test, one-way ANOVA, and Tukey Post Hoc tests (a=0.05).
Results: Statistical analysis revealed that the surface roughness was significantly reduced in both sesame and fluoride groups (p= 0.017 and 0.018, respectively) while the control group (distilled water) were not noticeably changed (p= 0.12). The control group had statistically significant difference with both the sesame and the fluoride groups (p= 0.007 and 0.007, respectively) while the there was no significance difference between sesame and fluoride groups (p= 0.997).
Conclusion: Following demineralization by acid etched process, the sesame gel significantly reduced surface roughness of enamel and its effect was similar to fluoride gel. 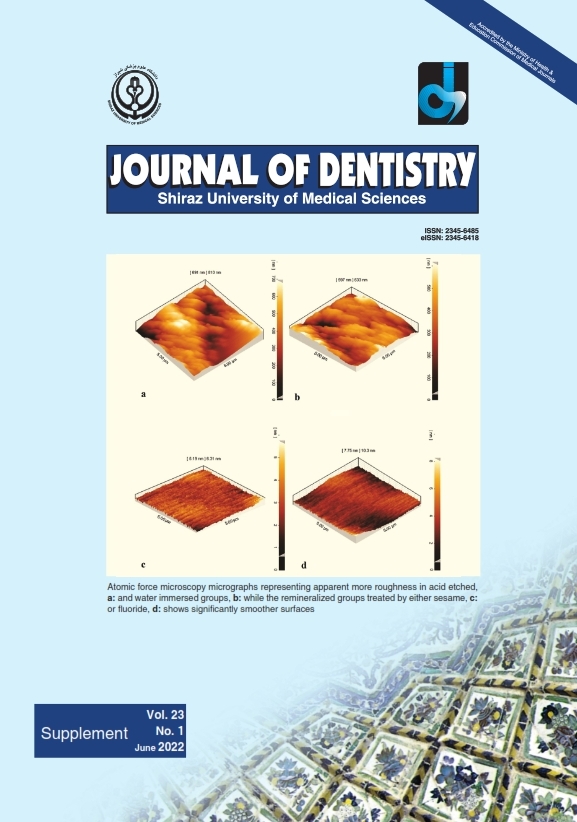